Campbell’s Russian dwarf hamster (Phodopus campbelli) is a species of dwarf hamster. It was discovered by W.C. Campbell in 1902 in Tuva, an area that has historically been geographically linked with both China and Russia. The Campbell’s dwarf is also native to the steppes and semi-arid areas of Central Asia, the Altay mountains, and the provinces of Heilungkiang and Hebei in Northeastern China. 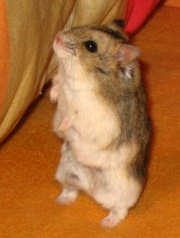 This hamster is sometimes referred mistakenly to as the Djungarian hamster (or Dzungarian hamster), or simply Russian, and often labeled as a Winter white Russian dwarf hamster. (See Winter White/Campbell’s Dwarf Hybrids below.) In Tuva the species is called Pouched in the Tuvan language, referring to the well-known physical characteristic of most hamsters. There has been some debate over the classification of Campbell’s dwarf and its closely related cousin, the Winter White, but now the two species are usually classified as Phodopus campbelli and P. sungorus, respectively. It has been claimed that the Campbell’s hamster is less friendly in temperament (to humans) than the winter white and is consequently more likely to bite or nip.

The average lifespan of the Campbell’s dwarf hamster is 1½ to 2 years, although they can live longer.

In the steppes of eastern and central Asia, the Campbell’s dwarf enjoys digging burrows which may extend up to three feet underground. These burrows are commonly lined with scavenged sheep’s wool and dry grasses; the burrows maintain an average temperature of 62 degrees Fahrenheit (16°C). Natural predators include various owls, foxes, falcons, and weasels.

In captivity as pets, the use of heavily scented wood-based cage litter such as cedar can lead to itching, sneezing and even severe allergic reaction and should never be used. Cat litter should never be used since it contains chemicals that will be deadly to hamsters. Paper-based beddings are encouraged, with aspen shavings usually now being regarded as the only safe wood-based choice.

Commercial “fluffy” beddings, usually made of cotton or similar material, have come under some controversy as possibly being damaging to stomach or intestines if swallowed and can also get caught around the limbs of the pups causing deformity and even death. While paper-based or aspen bedding is used to give the hamster burrowing opportunities while providing odor control, plain toilet tissue is frequently recommended as a nesting material to be used in addition to the “ground cover” of bedding.

Multiple owners find that the use of bathing sand is helpful. Chinchilla bathing sand can be found in most pet stores, although chinchilla dust may cause sneezing and respiratory problems. Campbell’s dwarves seem to particularly like cleaning themselves with sand, as the grains remove dirt and oil from the coat.

Cages should have at least 3 square feet (0.28 m2) of space per hamster, with one additional square foot per extra hamster. Wire, tube, and bin cages can be used. Campbell’s hamsters may have difficulty climbing up big tubes due to their small size.